Besides their inestimable beauty, which has earned them the title of UNESCO World Heritage Site, the Dolomites are also known for countless legends and sagas that are part of their cultural wealth. That's why this year mythological characters such as the Aguane, dwarfs, giants and a king are the focus of Dolomiti Superski's communication campaigns. If you want to immerse yourself in this fascinating world of legends, we have just the thing for you.

King Laurin and the Erosadira

The Dolomites look like they are on fire at dawn and dusk, when they paint themselves in shades of red, yellow and orange. This is the alpenglow, also called enrosadira. This natural phenomenon is caused by the unique structure of the rock faces, which reflects diffracted sunlight in the early morning and towards the evening. Well, that is how the scientists explain this phenomenon so unique to the Dolomites, the world’s most beautiful mountain range and UNESCO world heritage site.
But over the years, grandparents in the mountain valleys have handed down a completely different — and perhaps more interesting — version to their grandchildren. Laurin, the King of the Dwarves, lived among the summits of the Rosengarten group, whose name literally means “rose garden”. The roses, which bloomed in a sea of red, orange and yellow hues, were his pride and joy and legendary across the land. When Theodoric the Great, the King of the River Etsch, decided to marry off his beautiful daughter Similde, he invited all the noblemen from across the land... all of them except King Laurin. Laurin became enraged and decided to avenge himself for this humiliation, using his magical invisibility hat to sneak into the festivities. But as soon as he saw Similde, he fell deeply in love with her and kidnapped her.
The other noblemen, who were also determined to win the heart of the beautiful princess, immediately set off after the kidnapper, in a bid to bring the poor girl back home. King Laurin’s magical hat and enchanted belt made him both invisible and invincible, and he thought he had won the battle. But then his enemies managed to pull off his belt and defeat him. Similde was freed and taken back to her father. King Laurin, on the other hand, furious at the defeat, cursed his delightful rose garden, transforming it into a rocky expanse so no one could admire its unique beauty day or night. Luckily for us, grouchy old King Laurin forgot to include dawn and dusk within his curse. And so, for a few moments, at sunrise and sunset, the splendour of King Laurin’s extraordinarily colourful roses can be seen by us mountain lovers who look forward to the Dolomites’ next natural performance — the enroasdira.

The legends that abound in the Dolomites are some of our most treasured cultural legacies. Rare is a valley, town or village without legends of yesteryear which tell of mythological creatures or adventures full of heroes, monsters and... witches. Witches, in particular, have always been at the centre of tales which try to make sense of unexplained meteorological, agricultural or natural phenomenon.
Witches are not always old ladies who ride broomsticks, Harry Potter-style. Some cast good spells, while others are as wicked as they come. Wicked witches who gather to dance and cast spells and curses on the inhabitants of the mountain valleys have often been accused of causing inclement weather, floods, avalanches and drought. Sometimes their rivals, ‘white’ witches, reversed evil spells or helped people get rid of a curse.
The Dolomite valleys are home to countless legends about witches. Some of the best known include the Schlern witch, who lives on the imposing, unmistakeably Alpine mountain in the Seiser Alm, as well as Zicùta and Spina de Mul, sorcerer siblings who descended from the epic Fanes lineage, and witches from the Trentino, Belluno and Friulian Dolomite valleys. This fear of demons and witches has given rise to many place names which have survived to this day including the Piana delle Streghe (the witches’ plain) and the Banco delle Streghe (the witches’ bench), among others. Places which valley dwellers still hold their breath as they pass by even today.

Another famous mythological creature which is very common within most of the Dolomite valleys is the “aguana” Aguanas are usually represented as spirits similar to the nymphs of Roman mythology. According to some traditions, aguanas were women who lived in the woods and practised a pagan religion. These stories were inspired by communities who settled in the Alpine valleys throughout the centuries and millennia. Aguanas are generally considered to be non-human creatures which belong to the spirit world.
They are often described as young women and are usually very attractive and seductive to men. However, sometimes they appear as half-girl, half-reptile or -fish, and they like to scream loudly (in the Veneto there was, until recently, the expression “Sigàr come n’anguana”, which means to shout like an aguana). In other stories, they appear as skinny, ghostly old ladies, or nocturnal figures who disappear before the person who sees them manages to look them in the face.
All of the legendary aguanas possess at least one non-human trait: chicken or duck feet or goats’ hooves, scaly legs or a ‘sunken’ back (which they hide with moss or bark). Can you picture them? All legends agree that aguanas live in springs and streams and protect the water, testament to their closeness — their harmony — with nature. Legends tell of aguanas teaching humans traditional crafts such as spinning or cheese making. These tales always end badly, because the humans turn out to be greedy, ungrateful, disloyal and treacherous. Offended, the aguana disappears without teaching one last vital craft — often how to make salt, sugar, glass or something else that was sparse in the villages. Hands up who wouldn’t want to meet an aguana!

How the stars bekame Alpine flowers

When God created the earth, he decided to cover it in flowers and plants. He made flowers of every colour and scent, fruits of every flavour and herbs with wonderful properties, which he scattered here and there. Meadows and hills transformed into delightful colourful carpets and lush woodland teeming with life.
Only the Alpine mountain peaks remained bare and quiet. Nothing could grow among the cold and stones so high up. The mountains felt sad and asked the sky for help.
One night under the full moon, the angels collected the stars which shone in the darkness, and scattered them in between the rocks and crevices. The mountains happily wrapped them up straight away in a soft fuzz to protect them from the cold and offered them some earth so their fragile roots could cling to the stones. The moon looked down from the sky, and, enchanted by the spectacle of stars in the mountains, shone its beam down onto them, turning the flowers white. When the sun rose, the mountains were finally full of joyfully glittering flowers: the first edelweiss flowers.

Once upon a time, a mean dragon lived at the foot of Sas dla Crusc mountain in Val Badia. He had the body of a snake, long claws and enormous wings.
The monster ate animals and, occasionally, people. His favourite food was grazing sheep, so he often invaded the local sheep pens, panicking and killing the animals, and stirring up hate among the people. Desperate, the farmers turned to Sir Wilhelm von Prack, also known as Gran Bracun, for help. He lived in a castle in Marebbe and had just returned from war.
The knight, who was renowned for his extreme bravery and prowess, put on his armour, jumped on his horse, and set off towards the dragon’s lair at Sas dla Crusc. All of a sudden, the dragon came out from his lair and pounced on the knight. Unshaken, the knight struck the monster in the heart and it dropped stone-dead off the rock. For a long time, no one dared approach the dragon’s body. Gran Bracun, who is based on a real person, went down in history as a hero, and people still tell stories about his brave deeds to this day. And the dragon? They say that a long time after it was killed, a shepherd came across what might have been its skeleton. Eek!

Where the mountains sing

The story of Conturina is a classic — an enchanting princess who lived in a palace with her stepmother and two stepsisters. Her stepmother envied her beauty, which captivated all the young men in the kingdom. In particular, Conturina’s beauty prevented her sisters, who were nothing to write home about, from finding husbands.
The stepmother forced her to pretend to be mute and dumb (as wicked stepmothers do...). She spread the word around, hoping that the young men would stop paying attention to Conturina, but her plan failed. The awful woman then cast a spell to trap the young girl on the highest cliff over the Ombretta Pass. The girl would remain trapped forever between the rocks, unless she was saved by a besotted young man within seven years. She was unlucky, as no one was bold enough to pass those parts in time. Conturina remained a rock forever, despite her sweet singing voice. Wayfarers can still hear her singing on the quietest nights as they travel along the paths at the foot of the Marmolada. Listen, can you hear it...?

In the Dolomites every mountain is a legend

Unlock up to 23 badges linked to predefined activities on the slopes, reach one of the three Rookie, Expert or Legend levels and win fantastic prices.

By reading and answering six questions on our legends, you will get a badge too!

The game is simple!
In order to participate you must download the Dolomiti Superski App, give consent to participate in the prize-drawing held at the end of the season and link your ski pass to the profile.

What are you waiting for? Discover our badges! 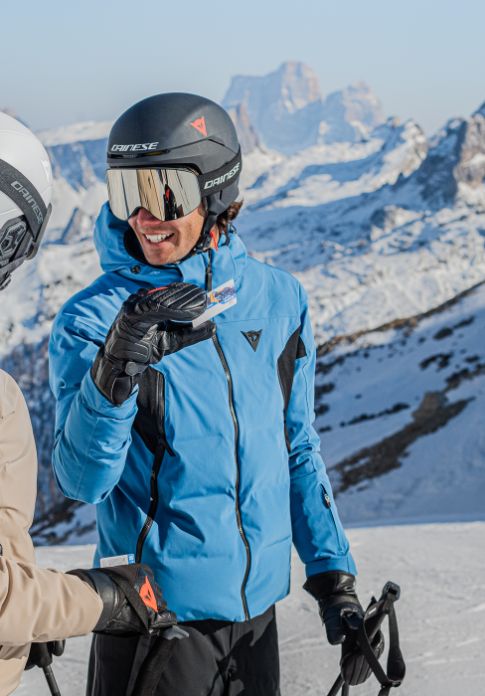 If you purchase your day or multi-day skipass Tthrough our online shop at least two days in advance of its start date, you will receive an immediate discount of 5%.
(e.g. purchase by midnight on Thursday to ski at the following Saturday).